Using archive material from the Imperial War Museum, the story of World War I, from the Battle of the Somme in July 1916 to the third Battle of Ypres one year later, is told in the words of the men who were there. These are the forgotten voices of an entire generation of survivors of the Great War.

Max Arthur’s compilation of First World War memories,
Forgotten Voices of the Great War, offers a reminder of the scale of human
experience within the 1914-18 conflict. Arthur, a military historian best known
for his history of the RAF and his account of the Falklands campaign in 1982,
has assembled hundreds of excerpts from the sound archives of the Imperial War
Museum. Officers, rank-and-file troops, Australians, Americans, war widows,
women in the munitions factories, and German soldiers too, all left oral
testimony of their experiences, and these interviews provide the basis of the
book. Arthur has put them in chronological and campaign order, and provided a
general commentary, but beyond that, has left the rich and moving record to
speak for itself.
The sheer humdrum ordinariness of modern warfare–the mud
and rain, the relentless loss of life and inevitability of death, the pointless
routine of attrition–come over in the matter-of-fact recollections of so many.
But so too does the humanity and morality of the ordinary soldier–a factor
that rather belies the recent emphasis amongst some historians on how soldiers
loved to kill. Arthur might have intruded more. No biographical information is
given about the owners of these voices, nor does he say when, where
and how this oral testimony was gathered.
These quibbles aside this is a worthwhile read and should
encourage people not only to observe a minute’s silence on Remembrance Day, but
also to spend a few hours in the Imperial War Museum itself. –Miles Taylor
–This text refers to an out of print or unavailable edition of this title.
In 1972,
a team of academics and archivists from the Imperial War
Museum set about the momentous task of tracing ordinary men and women who lived
through one of the most harrowing periods in modern history, the First World
War.
Veterans from Britain, Germany, America and Australia were
interviewed in detail about their day-to-day experiences on and off the front.
It has since grown to be the most important archive of its kind in the world.
These audiobooks contain just a sample of these voices —
some of which have rested unheard for more than 30 years — the forgotten
voices of a generation no longer with us. 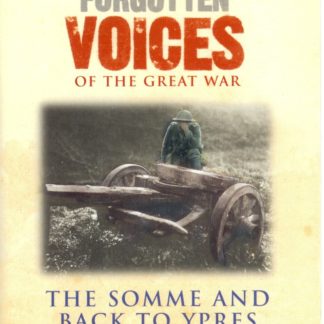